﻿The Courtauld Gallery reconciled me with Soutine﻿

Courtauld Gallery, within The Courtauld Institute of Art, is known for its exceptional permanent collection of impressionist and post-impressionists, as well as its small-sized but high-quality temporary exhibitions (e.g. Radical Nude, Gauguin, Becoming Picasso: Paris 1901) The current exhibition focusing on Soutine’s Portraits of Cooks, Waiters & Bellboys is a perfect fit for the two-room exhibition space, in my view, in fact reconciling me with the artist: when living in Paris, I preferred Modigliani to the meat-carcass painter Soutine.

Both Soutine and Modigliani used physical distortion, albeit to various degrees

Russian-Lithuanian artist Chaim Soutine (1893–1943) arrived in Paris in 1912-13 and met the Italian Modigliani in Montparnasse in 1914. They developed a close friendship and became eminent artists of the School of Paris, mainly non-French artists living and working there. Both used physical distortion, albeit to various degrees: Modigliani elongated the faces of his sitters, influenced by Ivory Coast masks. Soutine went further: he alters, stretches and pulls certain facial features to create a psychological intensity and reveal a truer expression of the sitter. Soutine’s sitters have expressive eyes, diverging from Modigliani’s figures with empty pupils or only one eye.

Pride of staff of high-end hotels and restaurants vs. the reality of their situation

Soutine’s agitated portraits of cooks, waiters and bellboys result in small necks, exaggeratedly large shoulders, and wide ears for some. Still, the uneasiness of sitters transpires, in their gaze and hands, and in their unfitted uniforms. Most of Soutine’s cooks, waiters, bellboys and pastry chefs pose in an artificial hands-on-hips position but the over-confident attitude looks forced in some. I felt it could have been because of the gap between their external pride in working at high-end establishments vs. the internal reality of their situation. This could have resonated with Soutine, who grew up in poverty as the 11th child of a Russian Jewish tailor. 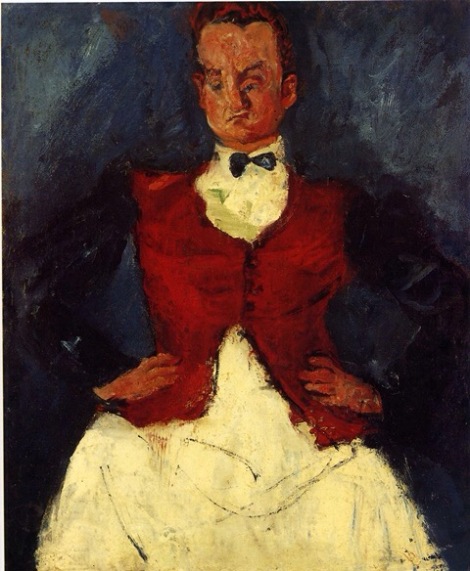 My favourite painting in the exhibition is Le Petit Pâtissier

My favourite work in the exhibition is Le Petit Pâtissier (1927, The Lewis Collection), an almost half-length portrait of a young pastry chef (“pâtissier”) on a dark blue background. Soutine paints the left cheek and ear of the pâtissier with vivid touches of red, recalling his paintings of meat carcasses and maybe referring to the heat from the pastry oven. His right eye is smaller than his left’s, and his left shoulder is larger. His childish features contrast with his confident pose with his large shoulders and hands clutched to his waist. Soutine treats his white uniform like a landscape, with the creases represented with red, green, and blue lines.

Another portrait of a pastry cook by Soutine caught the eye of art dealer Paul Guillaume and American collector Barnes, who bought more than 50 canvases of Soutine on the spot. Soutine’s Portraits: Cooks, Waiters & Bellboys runs at the Courtauld Gallery until 21 January 2018.

2 responses to “Le Petit Soutine in the Courtauld Gallery”