That is one exhibition I didn’t expect to like but did. Most works by Jean-Etienne Liotard (1702-89, born in Geneva), a contemporary of Watteau, are in private collections, making the Royal Academy’s show a rare opportunity to see this artist’s work.

Liotard started as a miniaturist but excelled in the art of pastels, as demonstrated in the RA exhibition. Shortly after we entered the show, my friend F. enthusiastically pointed to a portrait of Liotard’s daughter Marianne Liotard holding a doll magnificently executed in pastels.

Executed in pastel on parchment in c1775, Marianne is represented as a doll-like little girl holding her own doll dressed in the same blue tones. She has lips like a rose burgeon bud and blue clear eyes like those of a doll that blink open and close. But she is definitely a real girl: she points her left finger to keep the world around her in a silent “shh” as her doll sleeps.

Liotard used pastel on vellum, a support made of calf skin. The vellum’s firm surface retains the brilliance of the pastel colours and does not become uneven and grainy after rubbing. Passionate curator MaryAnne Stevens explained the inside of the vellum paper could be used to give a smooth effect. In most instances, Liotard used pastels made of ground pure pigment bound together with gum arabic for fine details. He would then use fixatives.

According to MaryAnne Stevens, Liotard was the first artist to develop his own ‘brand’, dressing as a Turk after spending four years in Constantinople and travelling extensively in centres of wealth and patronage in the search for commissions. 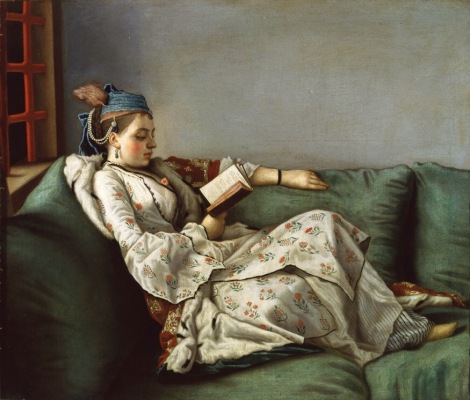 More importantly, I saw the best executed pastel portraits ever – a departure from an exhibition that I had expected to be dull. The curator also contributed to my enthusiasm by sharing her passion for her own discoveries while curating the show. Jean-Etienne Liotard runs at the Royal Academy in the Sackler Wing of Galleries until 31 January 2016 (it was held previously at the Scottish National Gallery).