A recent business trip to NY was also the occasion to fit in some art. Caught an early flight, made a quick stop at the hotel, and then straight to the Guggenheim.

I hadn’t read about Storylines before visiting so discovered the theme of the exhibition on arrival. Does art need a narrative and some explanation? The exhibition intriguingly starts with “difficult to understand” works, including Matthew Barney’s ‘CREMASTER’ series. I read that its conceptual departure point was the male cremaster muscle, “which controls testicular contractions in response to external stimuli”. From here I concluded that Storylines was about conceptual art.

In my view, conceptual art tells stories. The works of Taryn Simon tell a story: in her early series ‘The Innocents’ (2003), she catalogued the individual histories of people exonerated of crimes via DNA evidence. This is also the case of Danh Vo’s father’s Mercedes engine in ‘Das Beste oder Nichts’ (2010), a vehicle symbolising his father’s identity as well as success in the West.

I continued my Guggenheim exhibition viewing with Doris Salcedo, who I had not read about either, but I remembered her work Shibboleth at Tate Modern in 2007-08: a crevice in the floor of the museum.

Salcedo has a striking empathy for other people’ losses, demonstrated in universal works. She gives voice to the voiceless victims, and not only those close to her, in my view. Subjects include individuals from Colombia but not necessarily from firsthand experience or direct contact.

Her work is especially poignant as she typically avoids direct reference to violence. Instead she refers to communal mourning, showing shirts pierced near the heart and shoes as identifications of mass graves. Her works can be labor intensive, such as hand-stitching of hair or rose petals in A Flor de Piel, a tribute to a nurse tortured to death in Columbia.

Salcedo said that art is essential everywhere, as the artist needs to analyse and criticise, showing society the questions it needs to pose to itself. To her, an artist has a role of a critical eye. 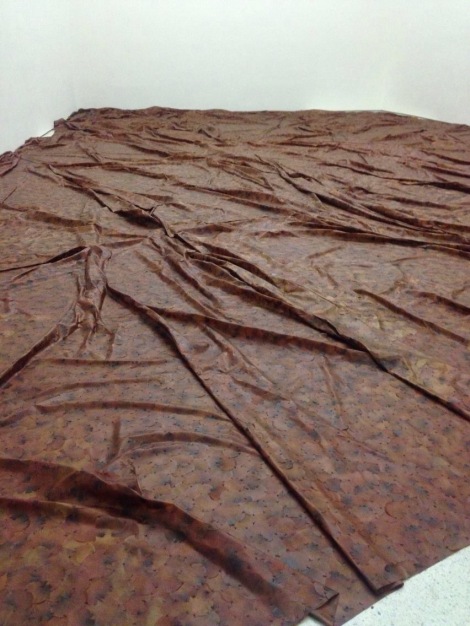 Storylines is shown until September 9, 2015 and Doris Salcedo until October 12, 2015, both at the Guggenheim.

2 responses to “Tell me a story”