Matisse was one of my first “art crushes”, having lived in Nice in my student years, on the Côte d’Azur in South of France. It’s at the Matisse museum in Nice where I first encountered Matisse’s cut-outs (“gouaches découpées”), some of which are being shown in the unique Tate Modern show that opened on 17 April and at MOMA since 12 October. I fondly remember his Nu Bleu IV, 1952.

Matisse (1869-1954) was diagnosed with bowel cancer in 1941 and the cut-outs were his recovery “companions “, allowing him to make artworks despite his limited mobility. My friend N. rightfully wondered why Matisse could paint paper sheets but was finding it increasing difficult to paint works of art. The answer is that his assistants prepared the paper with gouache under the direction of the artist. Tate’s Head of Displays Matthew Gale gave us a tour of the exhibition and pointed out that Matisse’s cut-outs were perceived as infantile in the prevailing artistic environment at the time.

Matisse’s book Jazz (1947), containing theatre and circus-themed prints based on his cut-outs, was the artist’s first true foray into the paper-cutting technique. Before Jazz, Matisse only used paper cut-outs to experiment ahead of a finished work. Jazz, entitled for the vitality and improvisation of character rather than the themes, was initially intended as an illustrated book of poems but the improvised hand-written notes that Matisse scripted while working on the Jazz cut-outs were included instead. Matisse’s notes are in large, beautiful, hand-written characters and their spontaneity adds a timeless charm to the artist’s book.

His notes (in French) do not always relate to the cut-outs and, equally, the cut-outs are not illustrations of the notes. They read like a diary; for instance, he wrote how large handwritten characters were mandatory to relate decoratively to the coloured paper sheets and that his notes were metaphorical asters (daisy-like purple or pink flowers) that would help in the composition of a more important flower bouquet. Tate Modern showed the stencil prints in horizontal vitrines along with the original cut-out models (“maquettes”), most loaned from the Centre Pompidou.

I felt sea was a vital theme in Matisse’s cut-outs. Oceania, The Sky was inspired by his trip to Tahiti and draws on his memory to create vivid representations of birds and fish, coral and leaves. Examining his “dictionary” which provides a glossary of his motifs, we learnt that the algae element represented a lagoon. Tahiti may well have been as great an inspiration for Matisse as it was for Gauguin. Often, Matisse’s motifs seem to float on his cut-out compositions.

Tate Modern brilliantly displayed what I would call a “Matisse Pantone”, showing the range of colours used in his cut-outs. I felt blue (the sea again) was his most used colour; this definitely stands towards the end of his life. An example is the Blue Nudes series, where Matisse, well known for his odalisques, comes back to his classical motif: the female nude. The Blue Nudes also best demonstrate the sculpture analogy with his cut-outs. In Blue Nude IV, small pieces of blue paper are cut and layered, like incisions on a sculpture. Matisse also used this trial and error method in The Parakeet and the Mermaid; Matthew Gale told us how the artist tried several blue nudes for the mermaid.

I will refrain from looking for a more sophisticated rationale for Matisse’s cut-outs (leaving that to art critics): they just make me happy. I was not the only one smiling at the opening night and curator tour. I smiled even more watching the dexterity and rapidity of Matisse cutting-out in paper in Adrien Maeght’s film shown at Tate Modern (son of art collector, editor and gallerist Aimé Maeght, founder of the Fondation Maeght). ‘Henri Matisse: The Cut-Outs’ is an exhibition I have most looked forward to seeing in 2014. The Cateau-Cambrésis museum had a show on Matisse’s cut-outs, which I missed unfortunately. I was astonished by the number loaned pieces to Tate Modern from illustrious museums, which are no doubt left with a few empty rooms! ‘Henri Matisse: The Cut-Outs’ opened on April 17 at Tate Modern and ran until 7 September and opened on October 12 and runs until 10 February 2015 at MOMA. Newly conserved, The Swimming Pool – not on view for more than 20 years and not shown in the London exhibition – returns to MoMA as a centerpiece of the New York show. 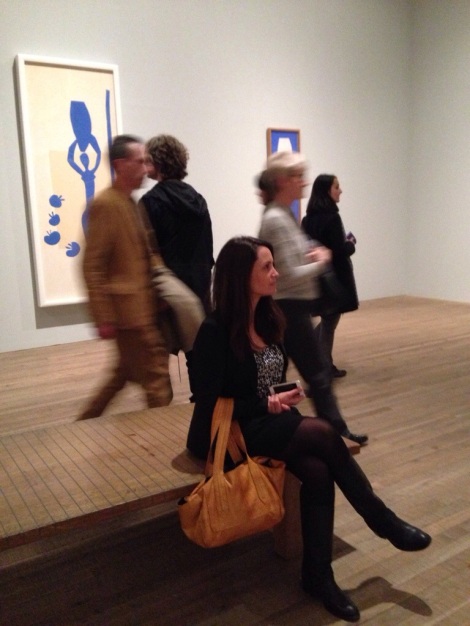 My friend N. looking at Large Decoration with Masks 1953