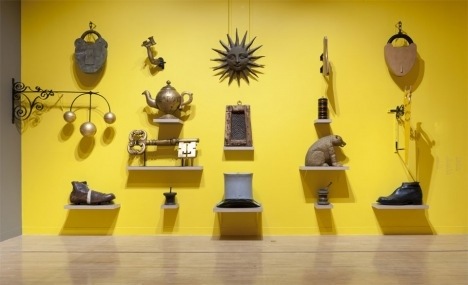 What is folk art? I had little idea on arriving at the British Folk Art exhibition during the Tate Britain summer party with my friend A. But we developed an understanding as we browsed the exhibition. The American Folk Art Museum uses the words “traditional”, “self-taught artists” and “outsider” art, as places folk artists within a context of “community, heritage, and spirituality” and makes a distinction between folk and fine art. Similarly, the Museum of International Folk Art in Santa Fe refers to “traditional artists” and sees “dialogue about traditions, cultural identity, community and aesthetics”. Tate Britain confirms the traditional aspect of folk art and self-taught artists, while highlighting the energy, variety and idiosyncrasies of British Folk Art.

The show didn’t make a good first impression: while I liked the first display of giant shop signs, I wondered if the show was just going to be a gathering of bizarre memorabilia. I nevertheless went on a curator tour organised for Tate Patrons, led by the enthusiastic artist and co-curator Jeff McMillan. Like the American Folk Art Museum, Jeff related folk art to outsider art, which I understand is linked to isolation from the mainstream art world. Most of the artists at the Tate Britain exhibition are anonymous, and the show also includes commercial work.

The curators aimed to create a visual show, hence the brightly coloured walls with very little text. Despite the available brochure, I wished there has been more documentation given the large number of small artefacts. The curators consciously avoided an encyclopaedic exhibition, instead providing a selection of themes and objects. The exhibition ranges from votive offerings suspended in bottles of liquid to objects made by prisoners from bones. Some works are naïve while others are meticulous, like the Mary Linwood needlework (one of the three named artists) and quilts made by women and military men.

I see the exhibition being popular for some but it wasn’t for me. It felt like a cabinet of curiosities or an attic from which an old person would explain each object’s history. Co-curator McMillan spent most of the time speaking in the first room, leaving comparably little time for our tour, and the curators didn’t seem to have had enough time to research every object.

The British Folk Art exhibition at Tate Britain runs until 31 August and will be touring to Compton Verney from 27 September 2014 to 14 December 2014.