My first encounter with Joana Vasconcelos was at the Château de Versailles in 2012. She was my main motivation to go to the Venice Biennale, where she had a floating pavilion in the form of a Lisbon ferry, decorated with authentic tiles in the passenger compartment and her works down below. So I was thrilled to hear from my twitter friend @ypdln that Joana Vasconcelos had a show in Manchester: Time Machine. I had never visited Manchester in my nine years in London and easily convinced Mr BB to make it a weekend away.

I believe Dr Maria Balshaw, Director of Manchester City galleries and the Whitworth art gallery, invited Joana Vasconcelos to have a show in Manchester as Joana’s use of textiles in her works connects her to the city’s heritage as an important textile manufacturing center (did you know that corduroy was known as “Manchester velvet” in Continental Europe?). Britannia 2014 is the centerpiece of the Manchester show: a major site-specific new commission, comprising richly coloured textile forms that cascade down the three floors of Manchester Gallery’s central atrium. Some of the suspended forms look like human shapes floating in Britannia, recalling Joana Vasconcelos’ Valkyries – mythological female figures who fly over the battlefield, controlling the fate of the warriors, and giving a new life to the bravest warriors who died. 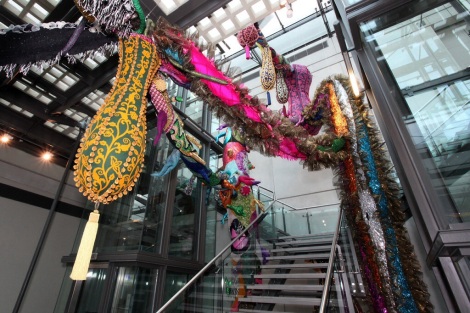 Looking at Joana Vasconcelos’ works in Time Machine (including Lilicoptère 2012, a Bell 47 helicopter decorated with pink ostrich feathers, Swarovski Crystals and gold leaf), I asked myself a question: is her art for art’s sake and enjoyment? They are undoubtedly joyful and humorous, and so is the way they are exhibited: Joana’s works are scattered around the permanent collection, à la ‘Where’s Wally’. An exception is the ominous piece War Games, which suggests violence in its black Morris Oxford car covered in toy rifles and LEDs, offset by noisy stuffed animals.

In my view, feminism and support of local art, both intertwined, frequently appear as themes in her works. Marilyn, not shown in Time Machine, is a giant pair of stilettos, made of stainless steel pans… Also, her support of local arts & crafts is often related to craft made by women. In Maria Pia, she uses Rafael Bordalo Pinheiro faience painted with ceramic glaze and covered with Azores crocheted lace, the latter typically created by women.

I had seen some of the works shown at Time Machine at Chateau de Versailles and at Haunch of Venison (Full Steam Ahead), but believe Joana Vasconcelos’ exhibition in Manchester presents them to greater effect. Similar to the Versailles exhibition, there are large installations, feature works to taking up entire rooms, but also with works on a smaller scale placed inconspicuously among items in the permanent collection. It is certainly worth the trip to Manchester and the museum itself is a jewel with a solid collection of Dutch, contemporary British, and School of London works. In a welcome contrast to many galleries, pictures are allowed, there is free wifi and a children’s area, and even a “please touch” display = the perfect museum! Time Machine runs at Manchester Art Gallery until 1 June 2014.