Maybe one of the best Tate Patrons events I attended so far, we went to meet Amalia Pica and her works at Herald St gallery in Bethnal Green. The London-based, Argentinian-born artist was there herself to give her perspective on her works.

Entering the room, my friend E and I saw geometric colourful plexiglas shapes left on the wall. I first thought that the ensemble of shapes was the piece. I soon learnt they were the tools for Amalia’s performance piece. She was quietly sitting with us during the performance. I didn’t know what she looked like before but I had encountered her work in Venice, at The Future Generation Art Prize@Venice 2013, a Collateral Event of the Venice Biennale. The exhibition showed 21 artists up to 35 shortlisted from 16 countries.

Four people went up on the “stage”. I assume the diversity of the performers was on purpose: a blond woman, a black woman, a white man with long hair and a man who appeared to be from LatAm. They started picking up the shapes, each one selecting a shape randomly, then coming together and placing the shapes in a spontaneous, overlapping configuration – either all four together, or three together and one apart. This resulted in wonderful new shapes and colours, in an infinity of possibilities. I did pick up that the four performers were counting in their head, which was confirmed later by Amalia Pica, who explained later they counted 30 seconds during ten rounds.

During the piece, I wondered how much control the artist had over the performance. There are rules, like the counting I described above but I felt it was more orchestrated than controlled. The four characters acted in a different way: for instance the blond woman had a light smile and her gaze crossed the audience; while the man with long hair chose to put his head down. Also interesting to me was how individuals create a group work together, without knowing which shape and colour the next person would pick. The group created Bauhaus-like geometric shapes, superimposing colours over each other.

Amalia explained her work cycle for this particular piece and I interpret it as follow: she leads the performance in giving guidelines; has black & white photographs taken of the performance; and then creates a sculpture from the photograph. A photograph documenting her performance piece, as well as the related sculpture is in the back room of the gallery. I found this cycle thought-provoking due to the plurality of and the connection between art disciplines.

We also had a slideshow of her previous works, which she commented on. Some themes emerged: public space, communication and celebrating. Her take on communication particularly struck me. She worked on the act of listening: her Eavesdropping series comprise glasses on walls, like when you want to overhear conversation in the next room; and also the act of not listening when she represented ear plugs in precious materials (Palliative for Chronic Listeners #1). It is really a luxury to have artists spending time explaining their works. I admire her for having so many ideas and developing some that are not obvious at first sight, which become evident once shown in her works.

Amalia Pica exhibition at Herald St gallery runs until November 17th and performances occur on Saturday and Sunday at 3-5pm. 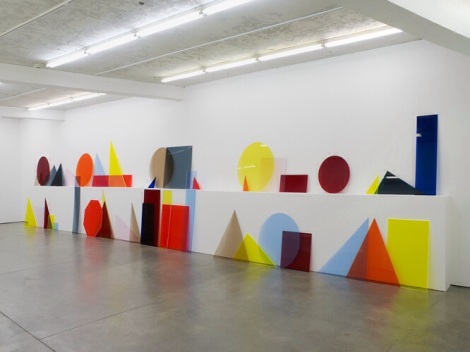