38 national pavilions, 3 ‘collateral’ events and three exhibitions outside the Biennale. That’s what Mr BB and I saw in 3 1/2 days. We had a blast and I wish we could have stayed longer to see more.

Mr BB in the UK pavilion

The Venice Biennale (‘La Biennale di Venezia’ in Italian) is a major contemporary art event that takes place every two years in Venice, Italy. Since 1998, it has operated a dual model, based on (i) national pavilions, each with its own curator and project, showing one or more artists; and (ii) an international exhibition organised by the Venice Biennale curator.

The 2013 Biennale shows works from the past alongside new commissions, including >150 artists from 37 countries, 88 National Participations (of which 10 countries were present for the first time), and 47 Collateral Events exhibited in different venues around Venice.

The Venice Biennale awards prizes to artists and national pavilions on the opening day to the public: Golden Lion, Silver Lion and Special Mentions (http://www.labiennale.org/en/art/news/01-06.html).

And La Fée Culturelle’s Lions are…

Golden Lion Russia: Vadim Zacharov reinterprets the mythological character Danae with a modern twist in a conceptual and performance art installation (Performance in Five Acts). Zeus impregnated Danae in the form of golden rain, seen here as a symbol of human greed. The exhibit has three levels. A conveyer belt carries specially minted coins to the skylight above the room, where they tumble down past a middle level viewing platform with church kneelers. At the bottom, female visitors only are allowed to scoop fallen coins up and pass them to exhibit staff who reload the conveyor belt.

Silver Lion Azerbaijan: I am glad Mr BB wanted to see that pavilion (I was more attracted by the collateral event ‘Love me, Love me not’, contemporary art from Azerbaijan). The theme of the pavilion was ornament and represented by six artists. I was particularly impressed by the art of light and shadow of Rashad Alakbarov.

Bronze Lion New Zealand (too good for a special mention so I had to invent a Bronze Prize!): If you read some of my recent posts, you know I developed a strong interest for Light art – first with the Light show at London’s Hayward Gallery, then Turrell at Guggenheim in NY and Dynamo at the Grand Palais in Paris. So I loved Bill Culbert’s inventiveness and use of the space at the church of Santa Maria della Pietà.

Portugal: Joana Vasconcelos, who I discovered at the Château de Versailles, was the main reason why I decided I will go to the Biennale this year. I was expecting a monumental burst of creativity piece but I still like her idea of a floating pavilion i.e. a Lisbon ferry decorated with authentic tiles and Vasconcelos’ works in the basement. The boat takes visitors for a 1/2h ride around the Canal, an added plus given how expensive all transport is in Venice. 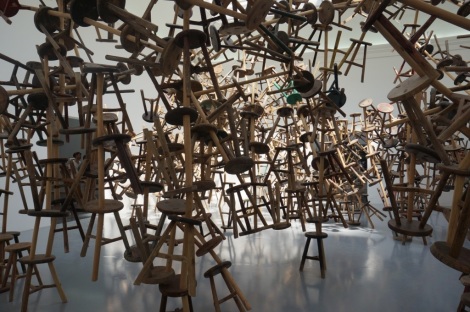 Bang (2013), an Ai Weiwei installation in the German pavilion

I should also mention my Palme of the weird and creepy art pieces.

Korea’s dark room: aside from the fact that the pavilion smelled feet (Mr BB’s correct observation) as we were all asked to remove our shoes (and Venice was very hot). The pavilion allowed for fun pictures. But its dark room, well it was just a dark room. Hmm… 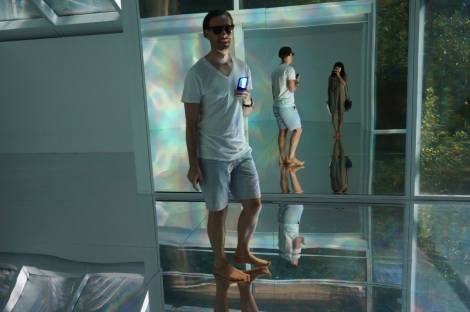 Mr BB and la Fée Culturelle in the Korean pavilion

The Israeli pavilion felt we were watching a group of people on drugs… Oh well.

Morton Bartlett’s dolls of anatomically correct prepubescent girls: those were not intended to be exhibited by the artist but found after he died. I don’t buy into the official theory that he was reliving a different childhood, in contrast to his real upbringing as an orphan. It was just creepy. At best.

Outside the Biennale and its collateral events, we saw Manet’s Return to Venice at the Doge’s Palace, Rudolf Stingel at Palazzo Grassi, and Robert Motherwell at Guggenheim.

Practical advice – I wish we knew this before!

The Biennale is laid out in the Central Pavilion (Giardini) and in the Arsenale. The established countries with permanent pavilions are in Giardini, alongside the Central Pavilion. Smaller pavilions, except Italy, are in the Arsenale and scattered around the city. Collateral events are spread amongst other venues. We took a guided tour for the Central Pavilion and Arsenale (excluding the national pavilions), not a must but which I recommend. We took daily tickets for 25€ each but those are restrictive as you can’t go out and come back. Best deal, which we didn’t know about, is the two-day pass for 30€, which allow unlimited entry and exit. Don’t miss the collateral events such as Future Generation Art Prize and Ai Weiwei, who delivers a powerful work of protest at the St Antonin church. 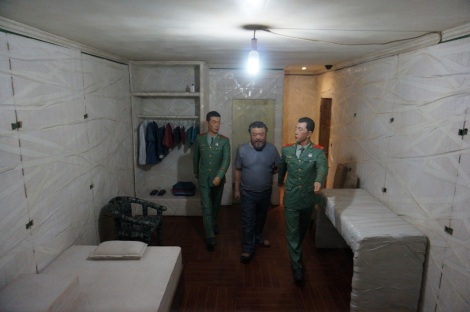 The 55th Venice Biennale runs until November 24th. It is closed on Mondays, open 10 am to 6 pm; the Arsenale is open until 9 pm on Fridays and Saturdays until Sept. 28th.