The exhibition made me wonder if the key difference between the Barbizon school and Impressionism was in the detail in depicting nature, such as tree leaves, moss, and rocks. I believe Impressionists focused on the effects of the light filtering through the tree leaves rather than the leaves themselves, unlike Barbizon painters. For instance, Monet’s The Bodmer Oak (from the Met) has light paint touches, less detailed trees but renders the light effects from the trees. I think Corot may be in between. 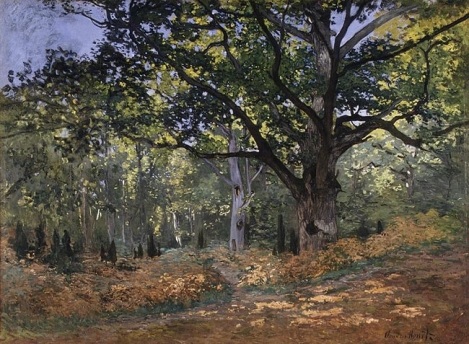 The Thyssen museum chose an unusual thematic display, grouping paintings by nature elements that were dear to open air painters. So there was a room for rocks, one for trees, even for clouds. I was myself fascinated by clouds on my London-Madrid flight – art is everywhere! The Thyssen ‘Impressionism and Open-Air Painting’ exhibition has closed now; I am now looking forward to see the Pissarro exhibition, which just opened.

One response to “Impressionism vs. Barbizon”